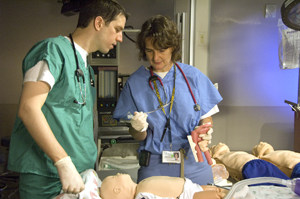 Poor interprofessional communication and teamwork are now well recognised as significant contributors to adverse events in healthcare.  These ‘non-technical skills’ are particularly pertinent in high-hazard areas such as obstetric settings, operating rooms, emergency departments and intensive care units. Recognition of the magnitude of these teamwork issues has led to calls for improved interprofessional training in many areas of healthcare, which has resulted in an increase in a range of team-based simulation activities over the past few years.
Simulation is a technique that allows the imitation of various aspects of patient care, and includes human simulation, mannequin-based simulation, and virtual reality.  Its use in medicine has been steadily expanding over the past ten years, often forming part of the CRM (Crisis Resource Management) model, based on principles originally developed in the aviation industry.  Most of the current simulated training programs involve experiential learning and rely on a clinical scenario which normally involves a high stress critical incident.  Learners work together to manage the scenario in the most appropriate fashion.  Such training aims to enhance ‘non-technical’ skills such as teamwork and interprofessional communication – both of which have been identified as significant contributors to error in healthcare[Lewis, 2007 #2753].  Simulation aims to allow learners the opportunity to manage critical incidents in a ‘realistic’ environment without the compromise of patient safety.
The notion of simulation fidelity is considered to be the degree to which the simulated learning activity replicates ‘reality’, and is routinely linked to a prevailing assumption that the more ‘high-fidelity’ the simulation, the more ‘effective’ the learning experience.  The notion of high-fidelity is however problematic for a number of reasons.  For example, several studies using the same simulation approaches may refer to its fidelity differently depending on the context in which the learning takes place, and the skills are taught.
At present, there is a particular stress on the importance of the notion of psychological fidelity (e.g. the degree to which the learner perceives the simulation to be believable) as the most essential requirement for effective interprofessional learning.  It has been argued that psychological fidelity can reproduce increased levels of individual stress and improve recall of information and its contextual application.  Although manipulating psychological fidelity by, for example, the addition of additional ‘stressors’ into a scenario may create more ‘realistic’ simulation scenarios, the simulation literature continues to overlook the importance of sociological factors such as hierarchy, power relations, interprofessional conflict and professional identity, which are now well-known to affect interprofessional communication, collaboration and teamwork.
The use of a sociological approach can allow one to see why employing CRM principles, an almost universal approach in interprofessional simulated teamwork training may be considered problematic.  As noted above, CRM was developed in an aviation context, and is based on the premise that a ‘culture of safety’ can be nurtured by encouraging a collective sense of agency, and that flattening hierarchy ensures that all team members are comfortable in voicing their opinions, concerns and recommendations.  Through applying a sociological understanding to this area one can see that the use of CRM principles ignores important socio-economic factors affecting interprofessional health and social care teams.
For more information read: Sharma, Boet, Kitto & Reeves – Journal of Interprofessional Care, Vol. 25, pages 81-83.